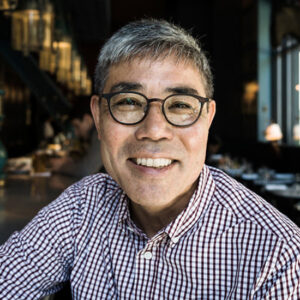 James was born in Indiana, grew up in Okinawa, educated in Palo Alto, and has a long and storied career in Silicon Valley. He reported directly to Steve Jobs at Apple, working to change the face of technology and consumer industries. He was a member of the original Macintosh team, and his work negotiating and launching iTunes changed music forever. He is the Founder and Managing Partner of Offline Ventures. His early stage investments include companies like Slack, Clubhouse, Notion, and Blue Bottle Coffee. Companies worldwide from Fast Retailing, Airbnb, Siemens, and Lawson have sought his counsel as an advisor.  As Executive Director of Philanthropic Ventures Foundation, he aspires to make a dent in the universe through people and communities rather than products and technologies. His deep Japan connections include on-the- ground relief efforts during the 1995 Kobe and 2011 Tohoku disasters, USJC and TOMODACHI programs, and launching Apple and NeXT Japan.