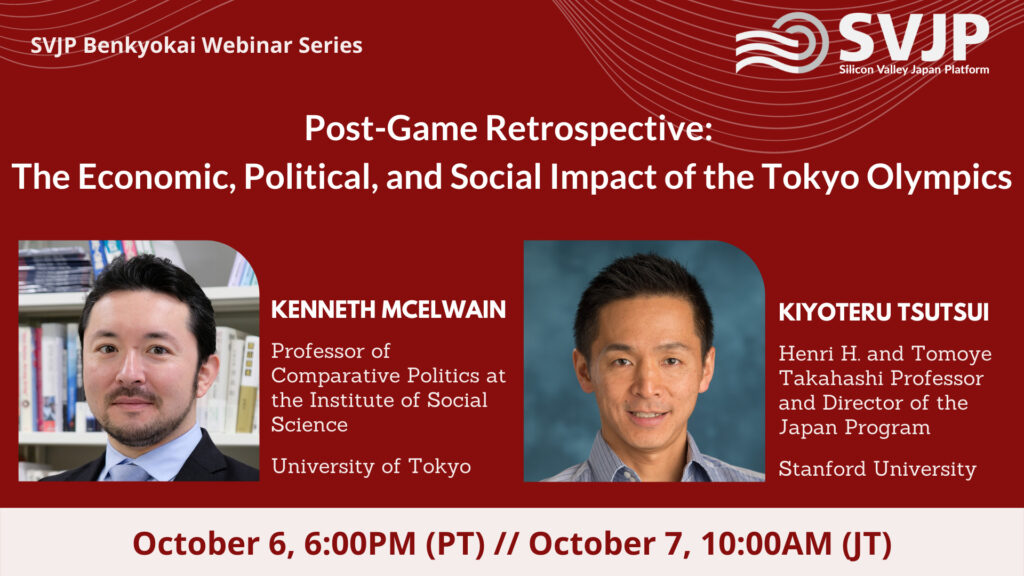 The Silicon Valley Japan Platform held its October monthly Benkyokai webinar,  “Post-Game Retrospective: The Economic, Political and Social Impact of the Tokyo Olympics,” on October 6 (PT) / October 7 (JT).  Together we learned from our featured speakers: Dr. Kiyoteru Tsutsui, Henri H. and Tomoye Takahashi Professor and Director of the Japan Program at the Shorenstein Asia-Pacific Research Center, Stanford University and Dr. Kenneth McElwain, Professor of Comparative Politics at the Institute of Social Science, University of Tokyo.

On July 23, 2021, despite a 78% opposition rate from the Japanese public, rising covid cases, a series of scandals, and soaring costs, the Tokyo Olympics took place as planned…one year late. The Games were held under unprecedented conditions, from strict quarantine rules to a ban on spectators- a first in Olympic history. Yet amongst all of the challenges, Japan may have found a silver lining to hosting the Tokyo 2020 Olympics. By the conclusion of the Games, Japan had won its highest number of overall medals (58) and gold medals (27), and navigated a global event many viewed as impossible.

How successful were these Olympic and Paralympic games? What were the costs? Now that the dust has settled from the Tokyo 2020 Olympics, we learned about the economic, social and political impacts on the host country.

Kenneth Mori McElwain is Professor of Comparative Politics at the Institute of Social Science, University of Tokyo. His research focuses on comparative political institutions, most recently on differences in constitutional content across countries. He received his BA from Princeton University and PhD in political science from Stanford University, and previously taught at the University of Michigan, before moving to his current post in 2015.

Kiyoteru Tsutsui is the Henri H. and Tomoye Takahashi Professor and Senior Fellow in Japanese Studies at Shorenstein APARC, the Director of the Japan Program at APARC, a senior fellow of the Freeman Spogli Institute for International Studies, and Professor of Sociology, all at Stanford University.

Prior to his appointment at Stanford in July 2020, Tsutsui was Professor of Sociology, Director of the Center for Japanese Studies, and Director of the Donia Human Rights Center at the University of Michigan, Ann Arbor.

Tsutsui’s research interests lie in political/comparative sociology, social movements, globalization, human rights, and Japanese society. More specifically, he has conducted (1) cross-national quantitative analyses on how human rights ideas and instruments have expanded globally and impacted local politics and (2) qualitative case studies of the impact of global human rights on Japanese politics. His current projects examine (a) changing conceptions of nationhood and minority rights in national constitutions and in practice, (b) populism and the future of democracy, (c) experimental surveys on public understanding about human rights, (d) campus policies and practices around human rights, (e) global expansion of corporate social responsibility and its impact on corporate behavior, and (f) Japan’s public diplomacy and perceptions about Japan in the world.

His research on the globalization of human rights and its impact on local politics has appeared in American Sociological Review, American Journal of Sociology, Social Forces, Social Problems, Journal of Peace Research, Journal of Conflict Resolution, and other social science journals. His book publications include Rights Make Might: Global Human Rights and Minority Social Movements in Japan (Oxford University Press 2018), and two co-edited volumes Corporate Social Responsibility in a Globalizing World (with Alwyn Lim, Cambridge University Press 2015) and The Courteous Power: Japan and Southeast Asia in the Indo-Pacific Era (with John Ciorciari, University of Michigan Press, forthcoming). He has been a recipient of National Endowment for the Humanities Fellowship, National Science Foundation grants, the SSRC/CGP Abe Fellowship, Stanford Japan Studies Postdoctoral Fellowship, and other grants as well as awards from American Sociological Association sections on Global and Transnational Sociology (2010, 2013, 2019), Human Rights (2017, 2019), Asia and Asian America (2018, 2019), Collective Behavior and Social Movements (2018), and Political Sociology (2019).

Tsutsui received his bachelor’s and master’s degrees from Kyoto University and earned an additional master’s degree and Ph.D. from Stanford’s sociology department in 2002.

Previous
MPower: Shaping a Better World Through ESG Investing
Next
Creating the Future of Healthcare Through Digital Technology