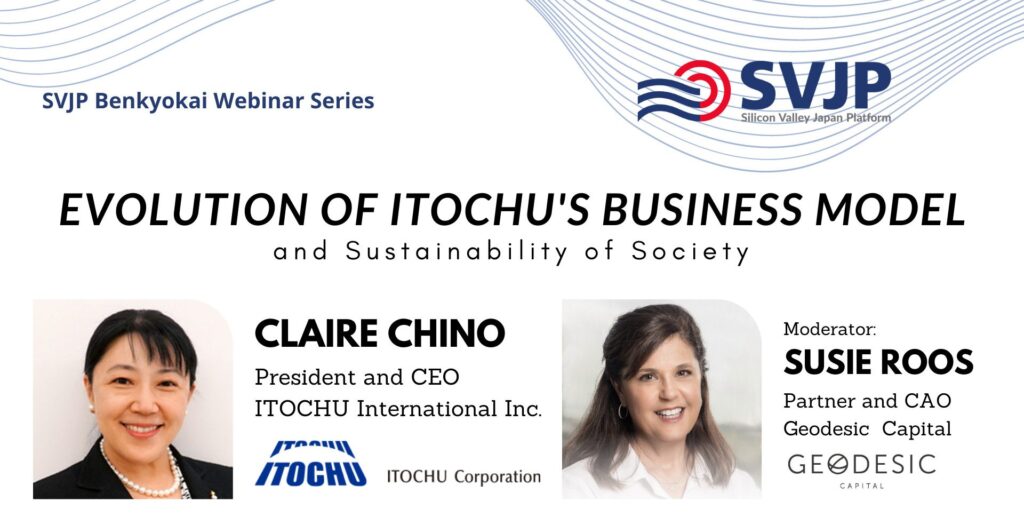 The Benkyokai discussed how ITOCHU managed during the pandemic by focusing on their core strengths and never losing sight of the areas that have helped them to become one of the largest general trading companies in Japan. Through their years of expansion and growth, ITOCHU has continued to remain true to their founder’s philosophy: “Good for the seller. Good for the buyer. Good for the society.” Today, Itochu has continued to focus on the sustainability of society as one of their top priorities demonstrated by their founder, Chubei Itoh, over 160 years ago.

Mitsuru Claire Chino is Managing Executive Officer of ITOCHU Corporation (“Itochu”), a Fortune Global 500 company headquartered in Japan, and President & CEO of ITOCHU International Inc., a subsidiary of Itochu in New York, overseeing North America.  Before assuming her position in New York, she was General Counsel of Itochu, and prior to that, a partner with an international law firm.

In 2013, she became the first female executive officer of any major trading company in Japan. Claire has received several recognitions, including from the World Economic Forum (Young Global Leader), Yale University (Yale World Fellow), Asia Society (Asia 21) and the U.S. Japan Foundation (USJLP Fellow). She has also been recognized in the legal community as a “Top 25 In-House Counsel in Asia” (Asia Legal Business), “Asia Pacific’s Innovative Lawyer” (Financial Times), and “FT Global General Counsel 30” (Financial Times), and has received a
“Transformative Leader” award (Inside Counsel). In 2018, the California Lawyers Association recognized her as the 8th Annual Warren M. Christopher International Lawyer of the Year. Most recently, she became the recipient of the Smith Medal from Smith College.

Susan (Susie) Roos is a partner and CAO of Geodesic Capital. Prior to Geodesic, Ms. Roos was an employment and labor attorney with substantial experience advising and counseling employers in all areas of employment law and labor relations. During her 34-year legal career, her practice included defending employers in wrongful termination, wage and hour issues, sexual harassment, employment discrimination and trade secret litigation before United States federal and state courts. As wife of the U.S. Ambassador to Japan, Ms. Roos lived in Tokyo, Japan from August 2009 to August 2013. While in Tokyo, Ms. Roos was an active voice supporting efforts to empower women in the workplace in Japan, and played an active role in the U.S. response to March 11, 2011 Great East Japan Earthquake. Ms. Roos is one of the founders of The TOMODACHI Initiative, a public-private partnership, and a member of its Board of Counselors.

Susie received her A.B. from Stanford University and a J.D. from the University of Southern California. She enjoys snow skiing, golf, gardening, politics, and movies. She is an avid fan of all Stanford athletic teams, as well as the San Francisco Bay Area professional teams….Giants, 49ers and the Golden State Warriors.

Previous
Why Clubhouse and the Social Audio is the Future of the Creator Economy
Next
MPower: Shaping a Better World Through ESG Investing